Over the past few days I finished up most of the engine sensor wiring. I still need to wire up the oil pressure sender and redo the EGT sensors. On the oil pressure sensor I decided to use my own Tefzel wire instead of using the cable provided by Rotax. I found the Delphi GT-150 connector on Ebay and it looks like it will be an exact fit. I had purchased some other 3 way Delphi GT150 connectors but it seems the pins are slightly in a different place so it doesn’t connect well to the sensor. Will provide photos when I wire it up.

For the EGT sensors I had originally purchased some Aviasport IM-927 K Type sensors which seem like they will work, but I was thinking that they may be a bit hard to service if I wire them directly into the GEA24. These sensors have 6 foot wire attached to the sensor which I was going to put pins on and connect directly to the GEA24, but if I ever need to remove them I’d have to depin the connector and pull the cable out through the firewall, etc. Also since the sensor screws right into the M8 thread on the exhaust you have to turn the whole thing including the wire which makes it even more difficult to change out. I contacted Aviasport and they said that you can extend the leads using K Type wire, but you can’t cut them. So to avoid having a loop of extra wire from the each sensor I order some Micro-1000 EGT sensors that seem like they have a much shorter lead. I can then run the K Type wire from the GEA24 out to the connector near the sensor. I’m hoping this will be a much cleaner install.

Another thing to note is that I changed back to using a single 22AWG shielded wire for each of the temperature sensors. I saw on some RV-12 build pages that they just use a single wire and not a 2 wire connection where one wire goes to the sensor and another to engine ground. The sensors themselves are grounded to the engine block (some temperature sensors have a separate ground wire which would require a 2-22AWG wire) so running an extra ground wire out from the GEA24 seems redundant and not necessary. The GEA24 ground and engine block will be tied together anyways so the only reason you’d run separate grounds would be to just be sure that you have a good ground at the same potential as the sensor ground. I suppose it would be no hurt in doing this, but you could potentially cause some ground loops. even if you wanted to ground those GEA24 pins to the block you could run one ground and jumper it to each of the pins. So it seems to me that you just don’t need to use those ground pins on the GEA24 when using these types of sensors. Now I could be completely wrong on this, but from the RV-12 builds I’ve seen it seems that you don’t need the extra wiring and if I am wrong I just need to run one wire from the GEA24 to the engine block. 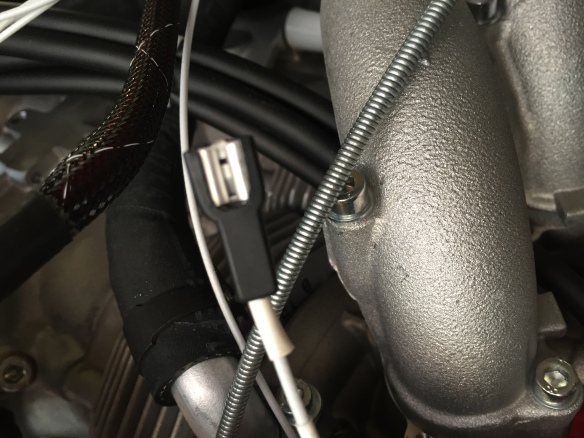 I found some plastic covers that I cut one side off to use as a cover for the temperature sensor connections. It’s a little nicer than the bare metal of the FAST-ON connector.

Finished connector. The other idea was to find a small boot that could slip over the top of the sensor and connector. 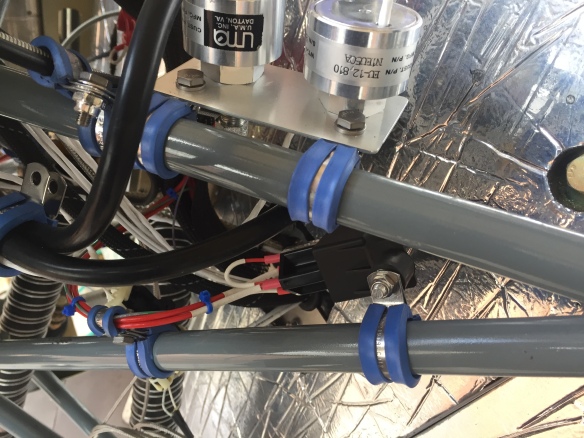 I purchased most of the engine sensors needed for the Rotax 914. The engine comes with a few, but there are also a few that needed to be purchased separate. Here what I ended up purchasing:

VDO 323057 – Airbox Temp, not absolutely necessary but nice to have.

UMA N1EU007D – Fuel Pressure, Reads differential pressure between the fuel and airbox so it has both a wet (fuel) and dry (air) side to the sensor.

UMA N1EU70A – Manifold pressure, Taps off of manifold tube. There is a Kavlico sensor that is viable with the Garmin GEA24 Rotax kit, but it’s very difficult to find from another supplier. The UMA was listed as an alternate to the Kavlico. You could probably use other absolute pressure sensors as well. (Still waiting for this sensor from Aircraft Spruce)

IM-927 EGT TYPE K – Exhaust temperature, As far as I can find I only need to install 2, though you could technically install 4. They typically are mounted on the rear cylinder exhaust (I believe 100mm from the cylinder). These have a nut attached and mount to the exhaust by removing the hex bolt and using the hole that hole so no need to drill a hole for the bayonet. (still waiting for these sensors from Aircraft Spruce)

So now on to the real headache. One of the goals I wanted to meet was to reduce the amount of rubber hoses used in the engine compartment since Rotax mandates (though it is not mandatory for experimental aircraft) to replace all rubber hoses firewall forward every 5 years. With that in mind I wanted to use PTFE (teflon) steel braided hoses for the fuel lines. In my Googling I came across Aircraft Specialty that has a full kit for the 912, but I didn’t see anything for the 914. I emailed Steve a few weeks ago and he was eager to want to put together a kit for the 914 and even help figure out how to plumb up a few of the fuel related sensors. Steve is builder and pilot and is extremely knowledgeable about the Rotax engines. He shipped out some parts for me to try a day or two after I first spoke to him and now that the Rotax mandatory service bulletin issue has been sorted out I wanted to get back to working with Steve to come up with an offering for not only the 914, but also some things that might make the Sling 4 build a bit better.

The FT-60 install was the first area I wanted to see if it could be improved. TAF has you cut and solder copper hose barbs onto the existing hard line between the fuel regulator and the right carb to insert the FT-60 into the fuel line. Steve felt like this could be better done with flexible lines and AN fittings, so he shipped me out some fittings to try. The space between the regulator and carb is maybe 5-7″ of straight fuel line and once you put the 1/4″ NPT to -4AN fittings on the FT-60 it doesn’t leave a lot of space. The FT-60 install instructions also impose a few restrictions: 1) Mount the sensor with the wires point up, 2) Don’t allow the fuel line to drop immediately on the output side of the sensor, and 3) Orient the sensor so fuel flows to the Inlet and out the Outlet (duh). So with that in mind I came up with a few install scenarios that I will run by Steve. I fabricated a quick bracket just to give me an idea of how I might mount the sensor. After the position has been finalized I’ll make up a proper bracket and Steve can build the hoses. BTW the fittings and hoses he sent are really top quality all stainless steel. 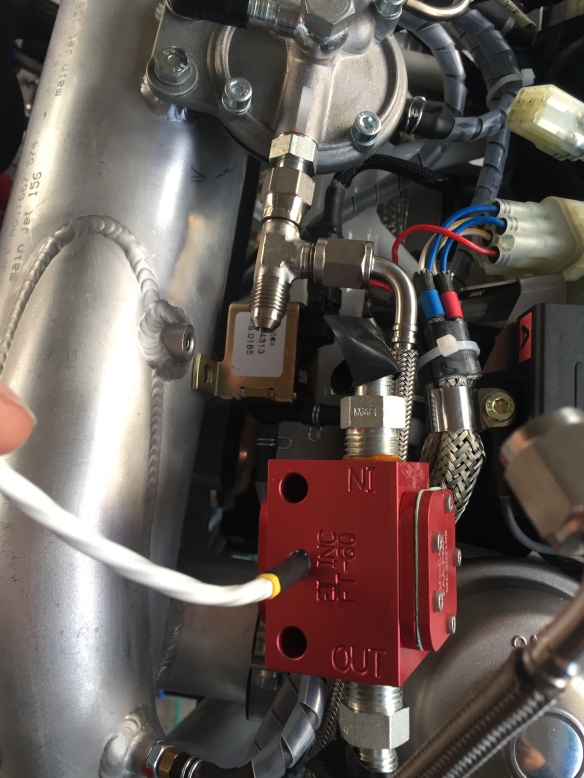 There really isn’t a whole lot of space to install the sensor. At the bottom of the photo (cut off) the hose drops down to the carb and only has room for a 90 degree fitting which the manual says you shouldn’t do. Plus mounting the sensor becomes an issue because there’s not a whole lot of places to mount anything. 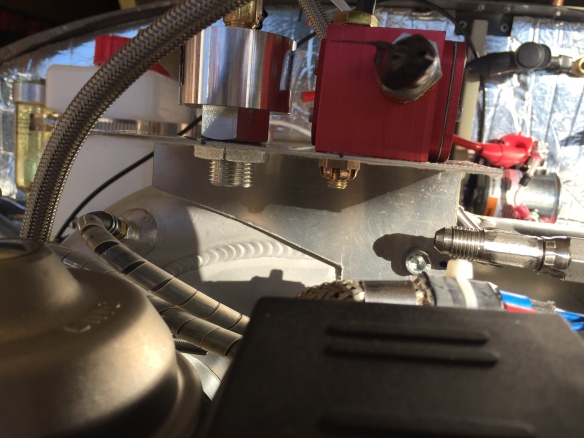 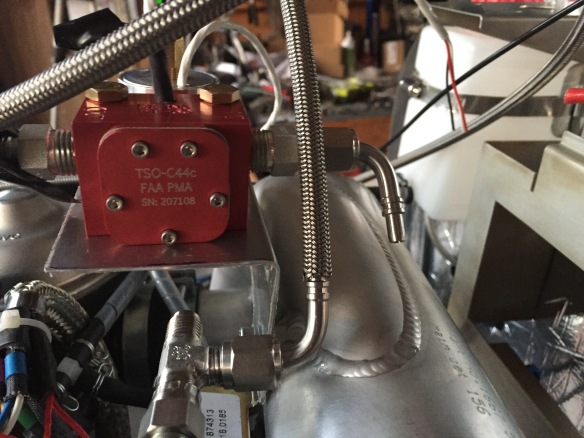 So the issue with this scenario is that I have to move the FT-60 about 1 inch forward to accommodate a 90 degree fitting to feed into the sensor, plus this connecting hose is pretty short. But it may still be a viable solution. 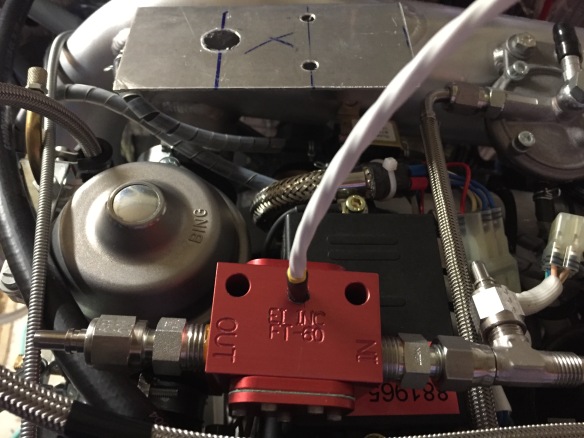 Scenario 2: This arrangement moves the sensor further forward and a bracket could be mounted over the ignition boxes. The tee is removed from the regulator and moved to the input of the sensor. Since the sensor gets moved forward the out to the carb has a longer hose and no immediate drop. The draw back here is the out to the pressure sensor kind of is in a weird place. I suppose the tee could be put back onto the regulator which I’ll have to try. 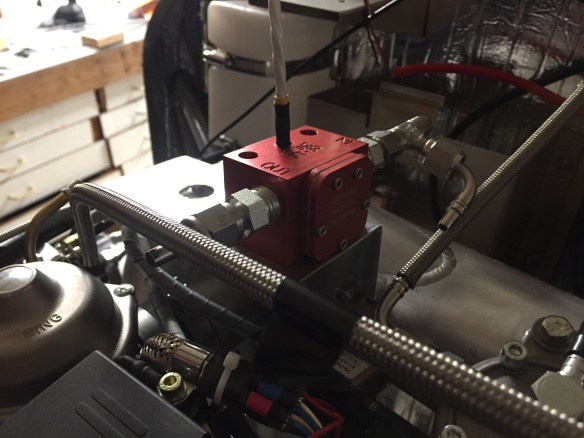 Scenario 3: This arrangement kind of combines the previous two. By moving the tee to the in of the sensor allows a bit longer hose and flexibility in mounting height between the sensor and the regulator. The out to the pressure sensor is pointing aft which would work well if I mount the pressure sensor on the firewall or on the engine mount. On the output side a 90 degree fitting could be used or even a straight fitting with a bit longer hose run to get a gentle bend to go down into the carb. I’m kind of thinking this may be the arrangement to do, but I will see what Steve thinks. 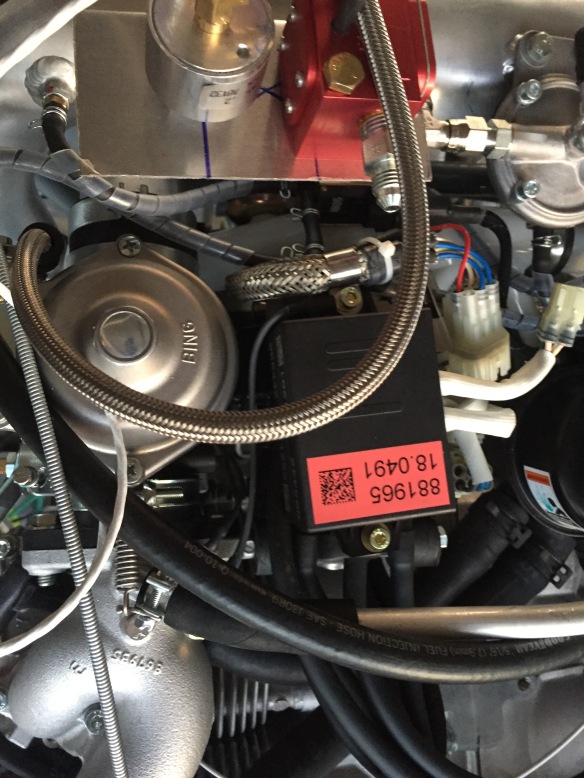 Scenario 3 using a long hose run on the out and a straight fitting. 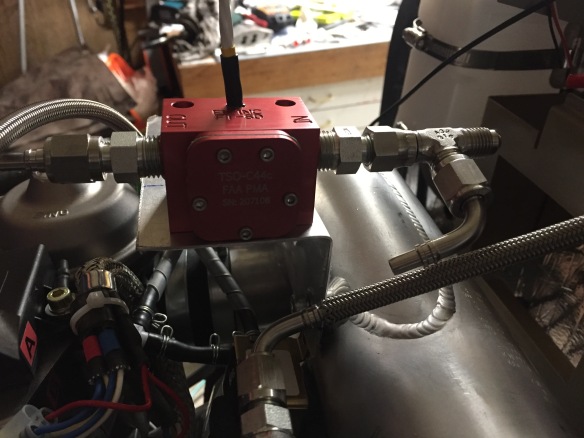 Sensor input side with the tee facing aft. The sensor can be mounted a little lower and the hose is a little longer then scenario 1. The run to the pressure sensor would be about 1.5-2 feet so a bit longer then expected but I don’t think it matters too much.

NOTE (1/1/2019): After speaking with Steve he thinks Scenario 3 will be the best solution. I will need to make a more proper mounting bracket and then I can mock up the hoses with some cheaper rubber or vinyl hoses. I then send them back to Steve so he can make the hoses.