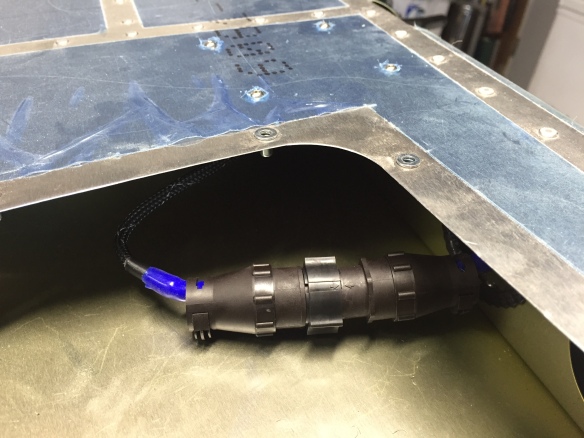 Trim servo installed with 4 M3 screws and medium thread lock. I’m wondering if I need to secure the connector some how. I’m thinking it may bump around and dent the skin. I wish I could have use the smaller connectors, but the smaller ones only go up to 4 pins and this needs 5 pins.

I also tried to install the new hinge pin. I was hoping I could put in a little longer pin and just put 90 degree bends on the ends. Well the hinge pin is pretty strong and there’s not much room on the left side of the trim tab to get large plyers in there so it’s pretty much impossible to make the bend. I also tried to flatten out the end using a hammer and some thin blocks of metal, but once again the hinge pin is just too strong to be able to do that. So it’s looking like I’ll either have to come up with some other creative way to secure the hinge pin or I’ll have to remove the hinge and put in a new one. To do this is a lot of work. It means removing about 50 rivets, cutting the new hinge, drill new holes in the new hinge, priming the hinge and then installing it back which needs about 30 shortened rivets to be made. It’ll probably be 4-6 hours of work, but worth it to have the piece of mind that the pin isn’t going to fall out in flight. Though I guess it hasn’t happened yet to the other Slings that were built per the manual (with no means of securing the hinge pin).

This site uses Akismet to reduce spam. Learn how your comment data is processed.