Right now I’m just keeping busy doing as much as I can while I wait for the main skin for the rear fuselage section and also one of the uprights for the main gear spar. I’ll also be using the new forward location for the parachute so I’m waiting for those parts as well.

I was going to start cutting the sound proofing material for the front floor, however after I looked at what I was provided by TAF I wasn’t really impressed with it. It looks like weather stripping material (1/8″ grey foam) and I know it’s going to rot and fall apart. So instead I went to Aircraft Spruce and purchased some 3/8″ sound proofing (https://www.aircraftspruce.com/catalog/appages/soundproofinstall.php) that looks to be much better. It should be here tomorrow or Friday (I Hope). I was considering getting the 1/2″ but was concerned with weight. I figured I can always double up the 3/8″ in some places for better sound proofing. 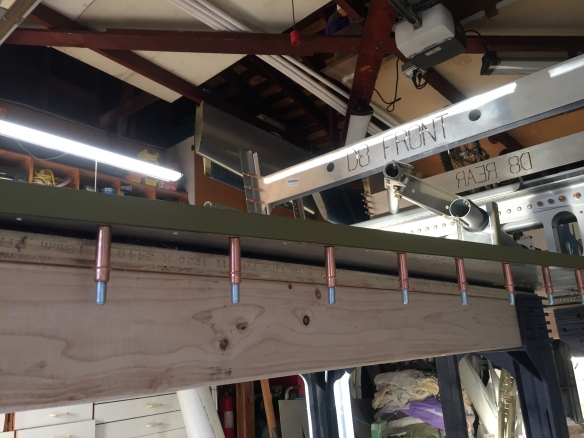 Front floor rivets along the outer channels removed and clecos back in. 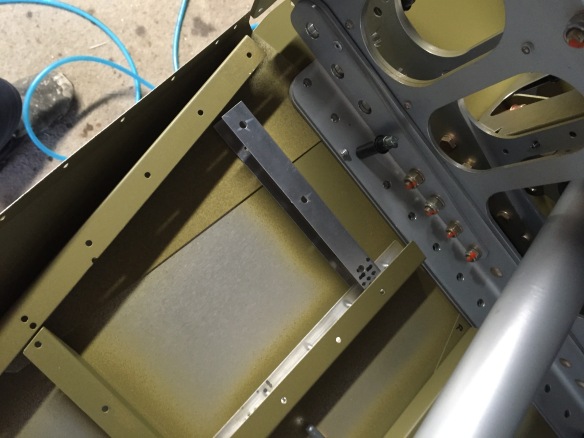 This is the CHL-034 part I found. I didn’t see it anywhere in my build manual and even looked at the newer PDF that I have. When I was working on the front floor a few days ago I wondered what the rivet holes were for… well now I know. 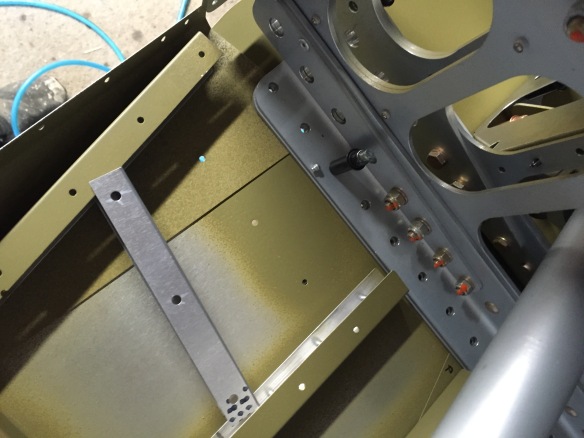 Here’s another photo showing the holes that the part attaches to (there’s one on the other side as well). 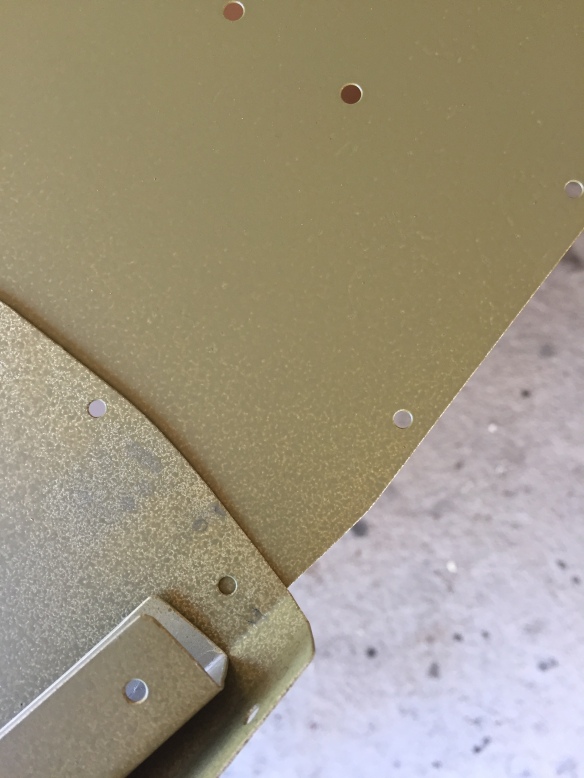 Looks like the hole in the middle of the photo needed to be drilled out to 3.2mm. Also there were two holes in the same part (SKN-007 L&R) that needed to be reamed out to 4mm since they shared a hole with the main spar. 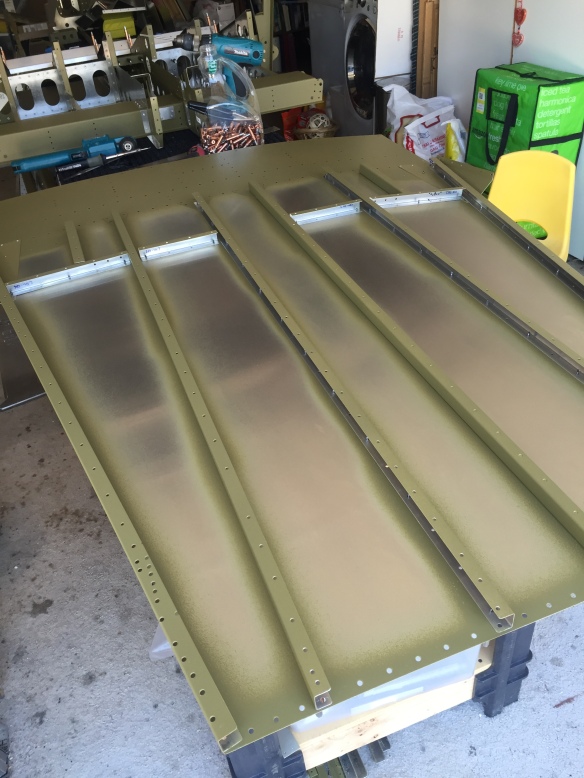 Front floor channels clecoed and ready to rivet. I ended up clecoing the top floor on to stiffen it up and make sure everything would line up ok. I decided to rivet this part first prior to attaching it to the main gear channel (as is stated in the manual) because I thought it would be easier to flip this smaller piece over to rivet. It seems to have worked out really well. 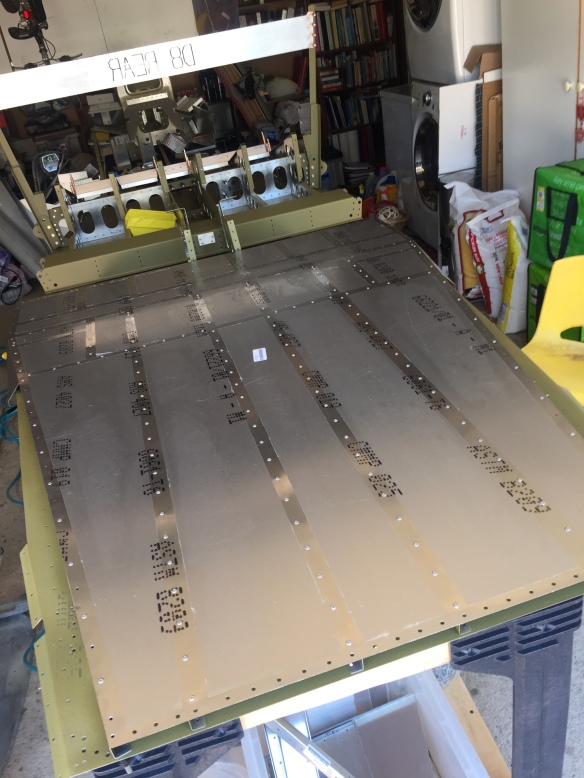 Bottom floor riveted. I realized that I probably shouldn’t have riveted to outside channels yet. I will most likely have to drill those out because they probably share holes with the side skins. 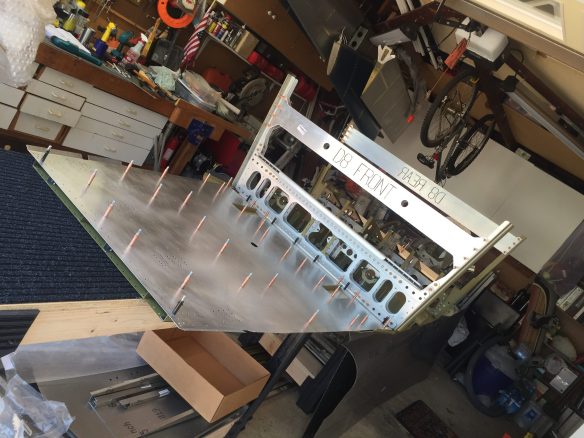 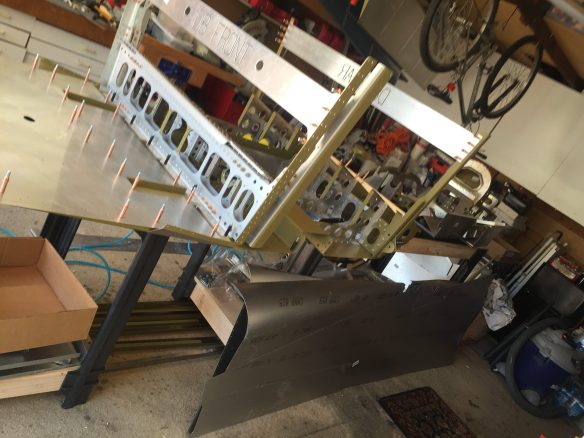 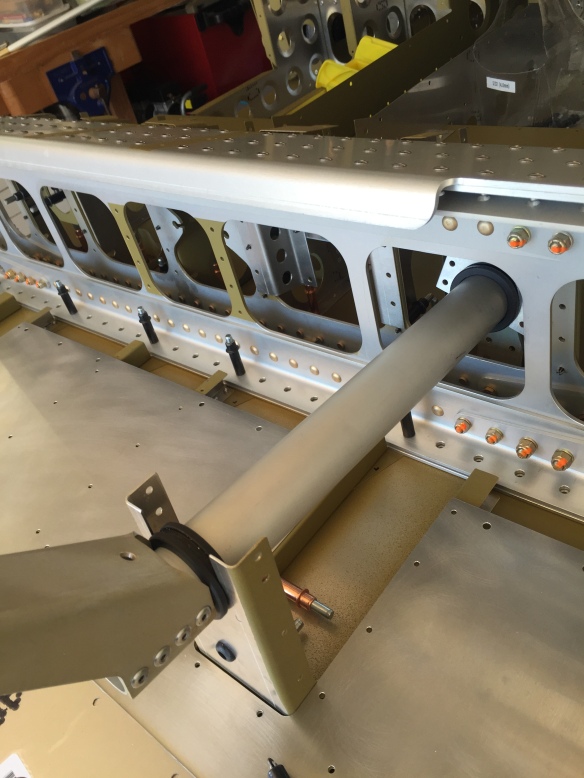 I put a grommet in the control bracket for wiring from the control stick. I think I’ll probably be needing a bigger grommet since I plan on putting quite a few things on the control stick… Elevator trim, PTT, AP disconnect, and Flaps up/down. I also still need to put insulation in the floor and prime the top floor panel before riveting it. 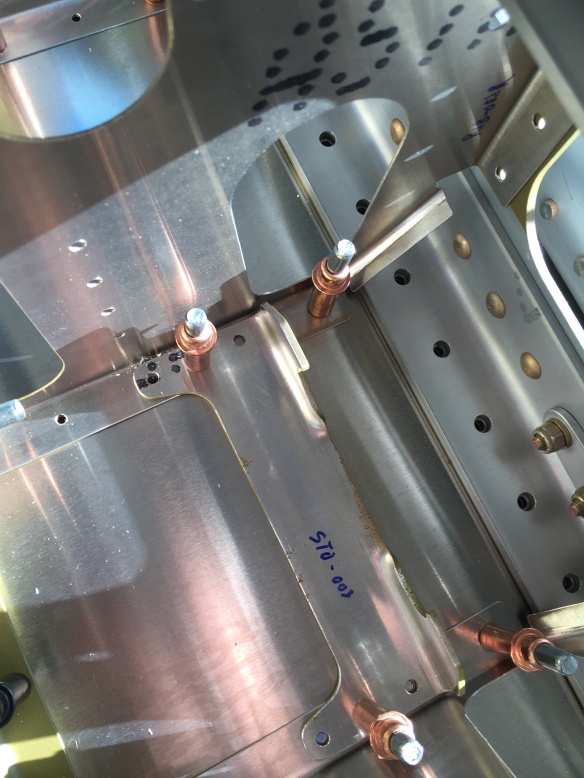 I noticed the holes in the aileron control stops (STO-003) are 4mm while the hole in the skin and ribs are 3.2mm so I reamed these to 4mm. This will make a few larger rivets on the under belly, but should look OK. Now the manual clearly states that STO-003 (part 16) is only mounted on the left side, but I was given 2 of these in the kit so do I put them on both sides? Is the manual wrong as it has been quite a bit? Also I saw from so other build logs that the correct orientation of the stop bracket is 180 degrees from what the manual says. 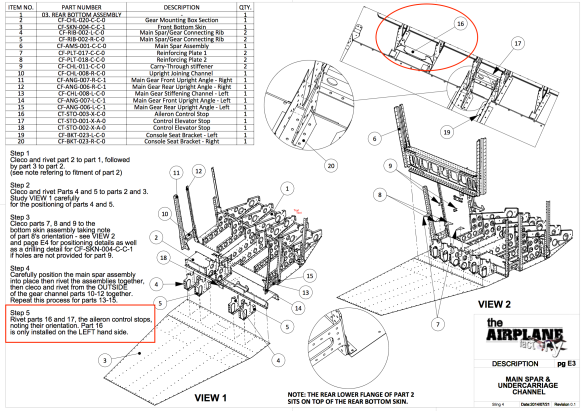 UPDATE: Heard back from TAF they said both sides need the aileron stops so I will put both in. 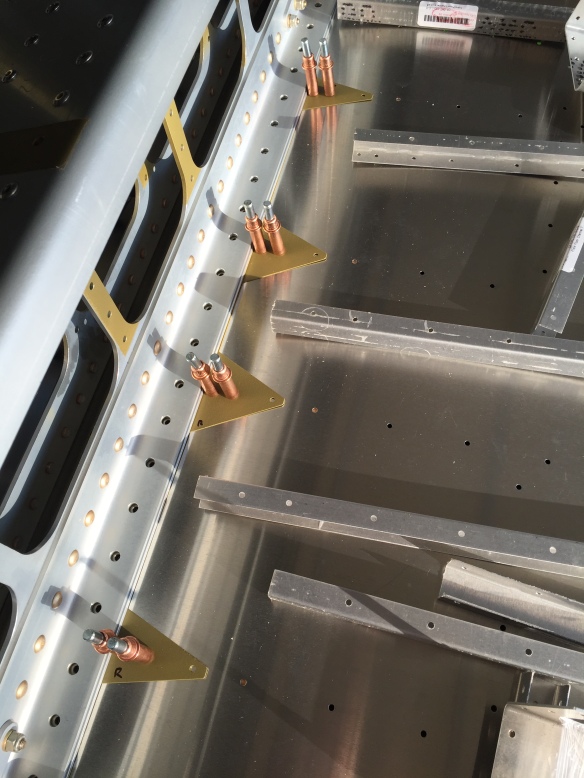 Noticed that these holes (the ones without the clecos) were missing in the skin, but are in the reinforcing plate pieces and also the longerons for the front floor area so it looks like they had to be drilled out. 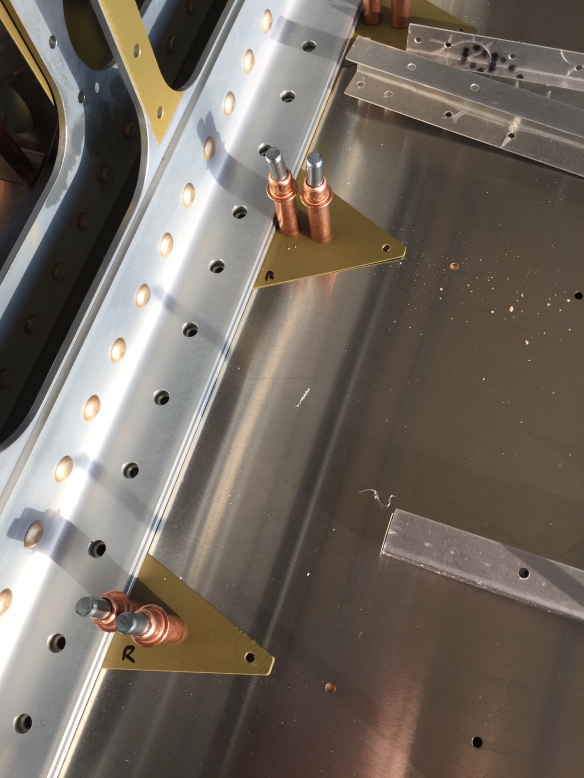 Done. You can see the longeron above the bracket on the top has the hole as well. 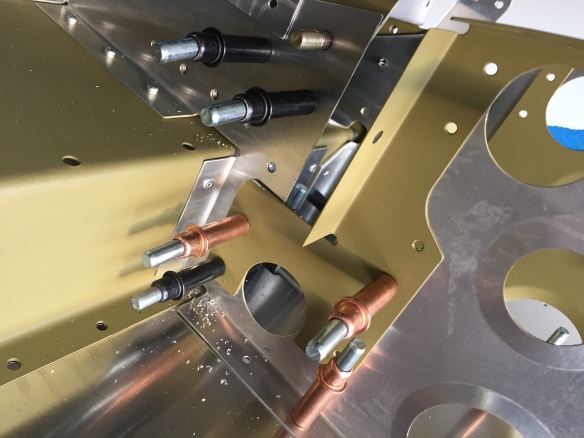 On the close off brackets (rib-009-L and rib-009-R) that mount to ribs 1 (left and right) the holes on the left needed to be reamed to 4mm since the bracket (BKT-023R) behind them are 4mm. I reamed one of them out already (Black cleco) so just need to do the one above as well and then the other side as well. Also I decided to mount the control closing brackets (rib-009) to the outside of rib1 instead of on the inside like the manual says to do. I’ll need to prime the other side of the parts since I didn’t expect to mount it this way. The hole on the top of it isn’t used so it doesn’t need to line up with anything and it make the bracket (BKT-23) site better on the rib and allows you to rivet this after putting in the elevator stop (behind the rib). 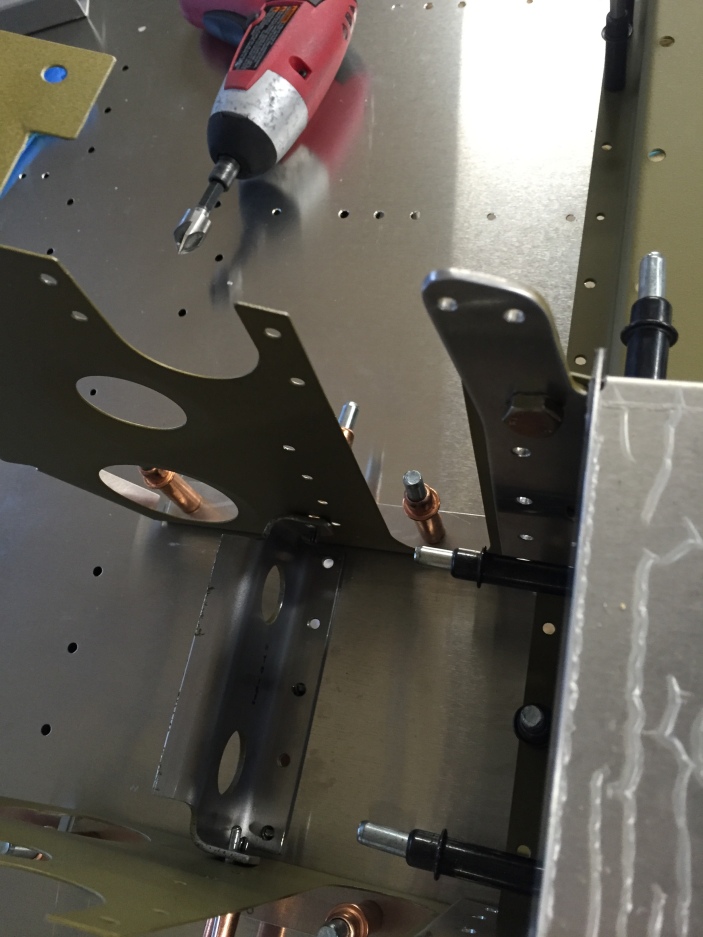 The elevator stop (STO-001) needed the side holes drilled out. Luckily I didn’t rivet this end of ribs 1 left and right yet so I was able to move them apart so I could get a center punch and a drill in there. I decided to use counter sunk rivets so that the rivet heads don’t interfere with the control closing bracket (rib-009-L and rib -009-R) 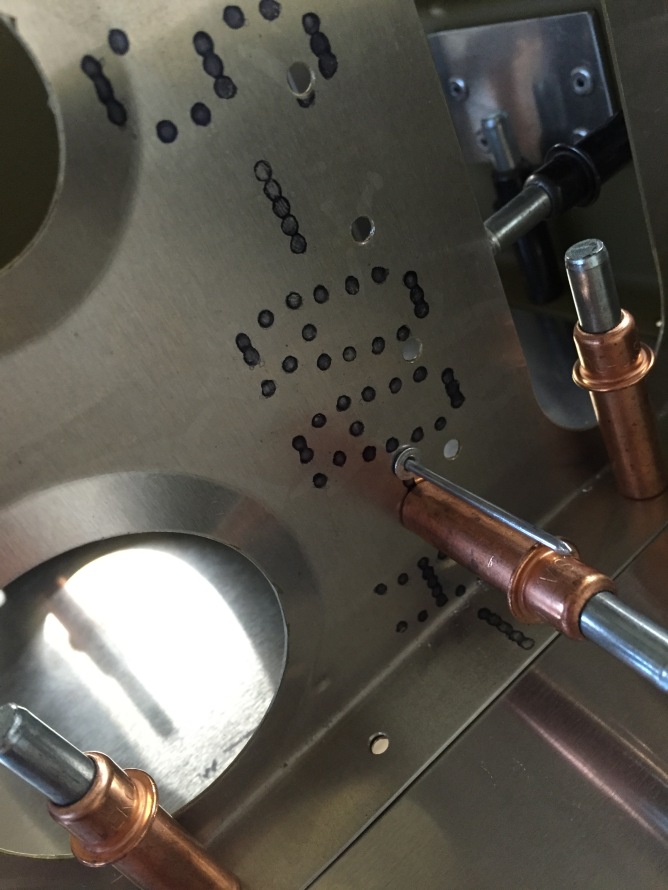 Done. The rivet is just resting in there, once it’s riveted it will site flush with the surface of the rib and allow the closing bracket to sit flat as well (those are the hole to the right) 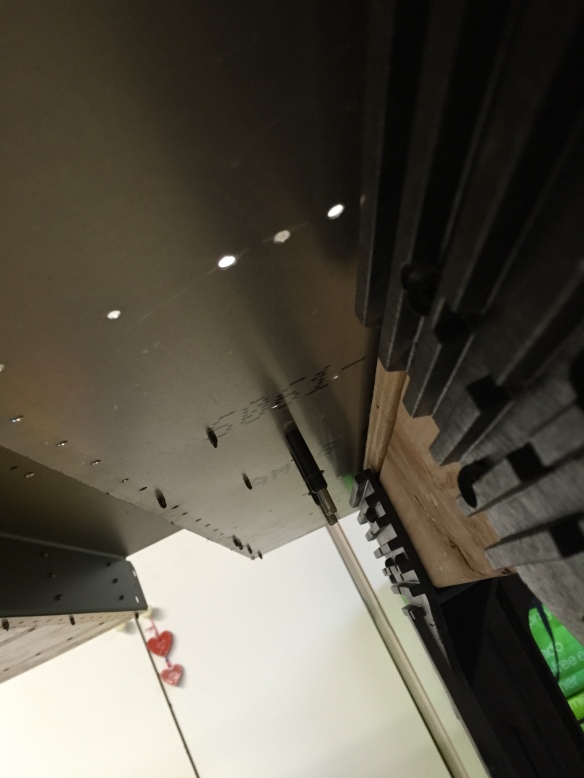 The one thing to be careful of when positioning the elevator stop bracket (STO-001) is to not pull it forward or back too much or push it down or pull it up. If you do you will get a pull on the skin and it will look like a dent (or bump), so position the bracket and then look underneath to make sure you don’t have a dent or bump in the skin.

Got a lot done today:

The elevator stop (STO-001) is going to need a lot of work. I had to file the ends quite a bit to get it to fit between the left and right ribs 1. Also holes aren’t drilled in the ribs so that will need to be done as well. I’ll work on that tomorrow. 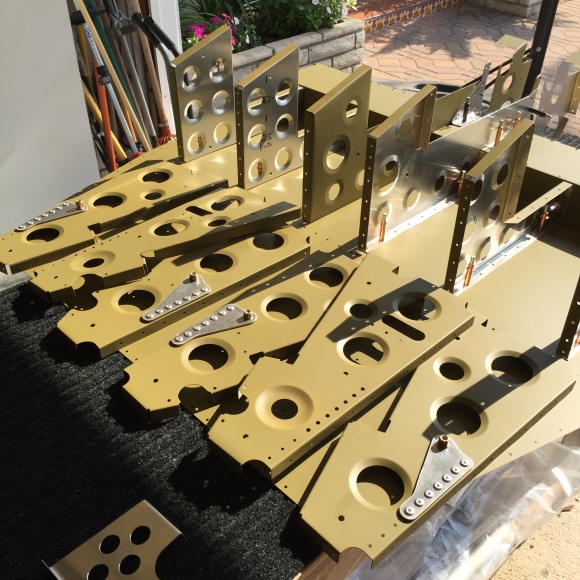 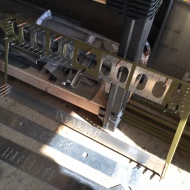 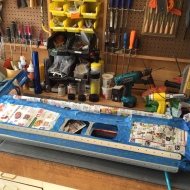 Masked off the main spar for priming 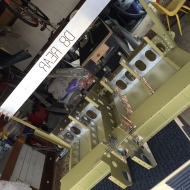 Things that were done today: 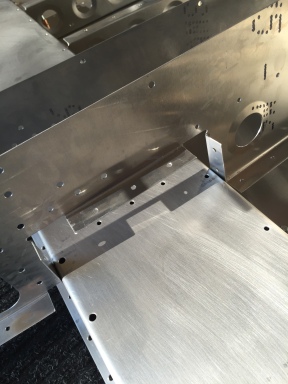 Was too tight of a fit on the main gear channel 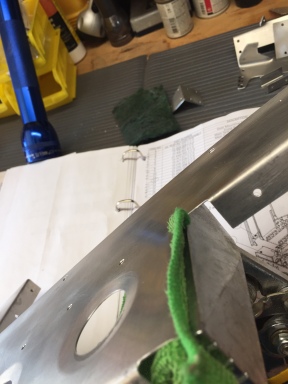 I used a large clamp on the flange

Then pushed down and around to pull the flange bend tighter

just straighten out the flange

I was able to re-bend the flange a bit by using a large clamp (and a cloth so it didn’t scratch the metal). Then I pushed down (and around) and also pulled down on the clamp handle to move the flange bend a little bit back. The flange then just needed to be bend back straight. The part still fit pretty tight, but at least the rib wasn’t bending and everything seemed to line up well.

Here’s it is all assembled (temporarily). Still need to clean and prime everything. Yes, my garage is a mess. 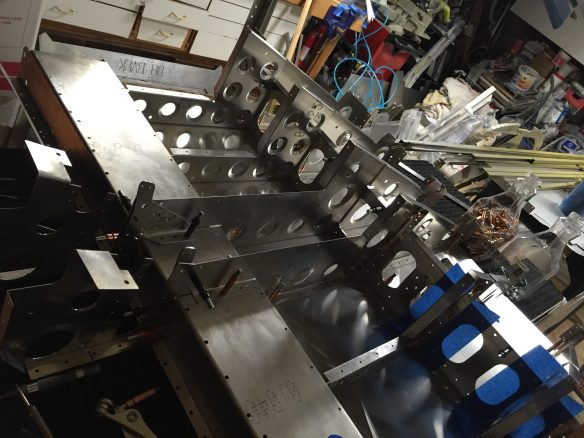 I was able to get in some time today to work on the plane. I got a few things done.

I was able to get through prepping all the rear spar parts and also some brackets that attach to the main (pre-assembled) spar as well at parts for the main gear channel and support angles. Some prep of the pre-assembled spar was also in order because it didn’t appear that it had been deburred.

I had noticed from some other build logs (Craig, Peter, and Gordan) that there may be some missing holes on the rear spar for mounting the second part of the elevator autopilot bracket. Sure enough, looking at mine, I was missing those holes as well. I don’t have the autopilot servos (Garmin GSA28) yet so I had to make a template based on the dimensions from the G3X Install manual and mounting brackets that I had with the kit. I just used a piece of laminate flooring and drilled 4.0mm holes at the correct locations making sure all the holes were square to one another. 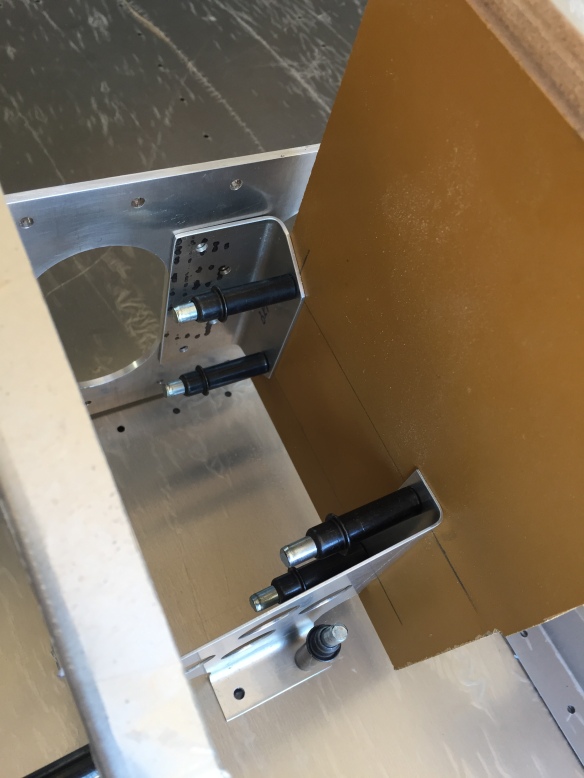 I attached the brackets to the template and also attached the rib and spar to the belly skin to make sure spacing was correct. Then I used a center punch to set the marks for drilling. The bottom most hole didn’t line up quite right after drilling the pilot hole so I had to file it out a bit to center it up then I used the reamer to get them to the correct size. 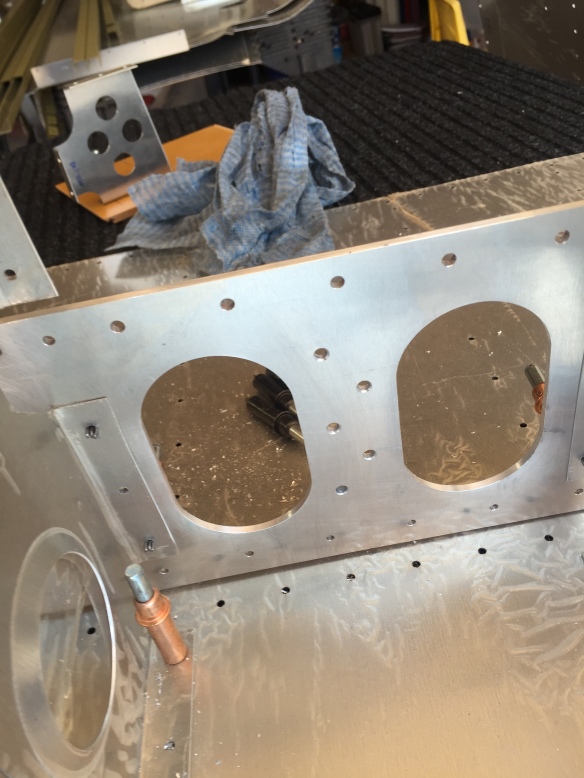 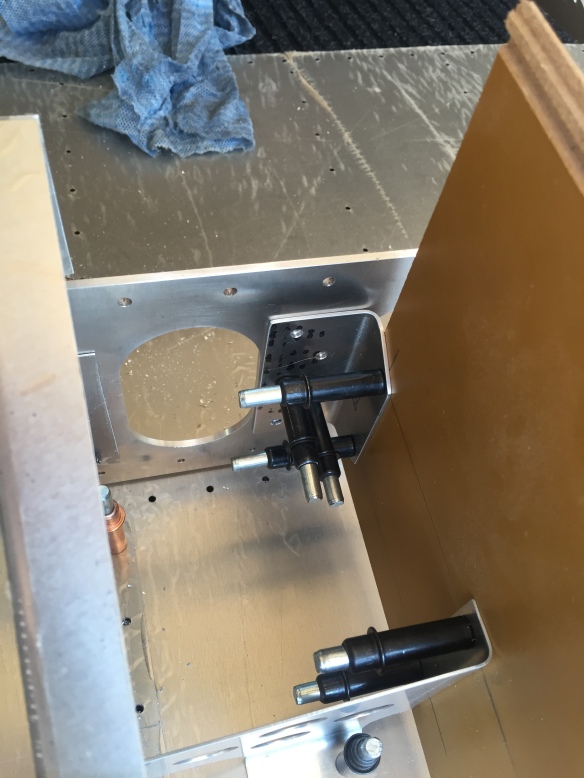 I also did a test fit of the control brackets (to the main spar) that hold the control stick tubes. The manual says to put in the bushing and rivet the bracket together… well the bushings are now pre-assembled on to the tube of the control sticks. I will not be riveting or attaching them just yet. I should be able to wait until I have the fuselage built up more so I can get a better fit. I did get them somewhat close, they may need a little tweaking to fit right, but I’ll give them a prime (the brackets not the control tubes) so they’re ready to go. 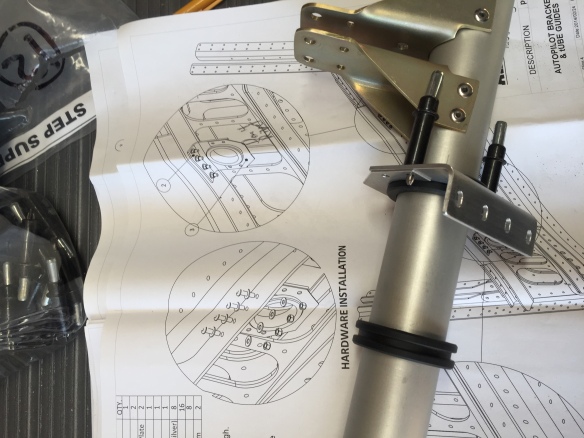 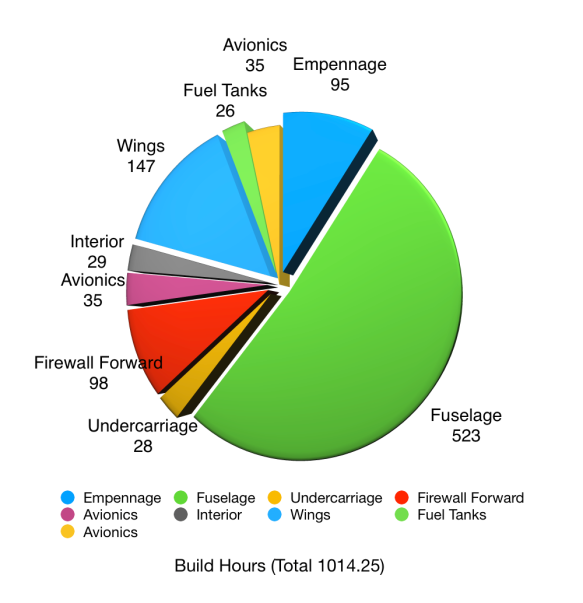